Legendary Arko III passes away at the age of 27 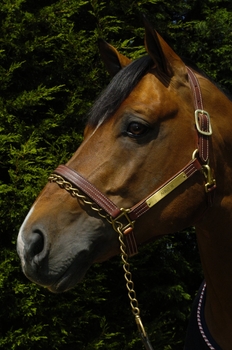 Sad news.  The legendary Arko III has passed away at the age of 27.

This iconic full-of-presence stallion accumulated winnings of £1.2million in his lifetime, was crowned number 1 in Europe for three consecutive years and won the richest prize of the showjumping world in 2008 in the Calgary CN Grand Prix, Canada, with Nick Skelton, worth a cool £173,240 to the winner.

“Arko was a great horse for me and won some of the great Grand Prix of the world but most of all he was the one that got me back riding again after I was told I would never ride again and I will be forever grateful to him,” said Nick, referring to his well-documented fall from a young horse resulting in breaking his neck.  “He was a great character, always happy in the yard and watched everything that was going on.  I’m glad he had a long and happy retirement.”

Owners Pat, John and Lisa Hales of Shaw Farm stud were also awarded accolades due to their ‘horse of a lifetime’ as FEI winning owners for two years running while Arko himself was crowned British Equestrian Showjumper of the Year on an unprecedented five occasions.

“He was very special in every way, both in the ring and out and was everyone’s favourite.  He was everything; good-looking, had the technique, the scope and luckily, he has passed it on to his youngstock,” said Lisa Hales.

His legacy lives on in his offspring, including two prominent British-bred stallions who themselves have jumped at 1.60m level and are becoming sought-after sires.   Shaw Farm Stud’s home-bred 15-year-old SFS Aristio (Arko III x Voltaire) has represented Ireland in 5* Nations Cup competitions with British-based Anthony Condon in the saddle and notably provided a fantastic winning double clear at Hickstead in 2019 to gain victory for their team.

John Whitaker’s Argento (Arko III x Gasper) – bred by Keeley Durham – retired in 2019 aged 17 after many wins to his name, including the Global Champions Tour and Olympia.  Argento also followed in his father’s footsteps when topping the FEI World Breeding Federation for Sport Horses (WBFSH) in 2015.  Arko headed the same list in 2005.

Another showing talent is Arkuga (Arko III x Heartbreaker), an up-and-coming promising 10-year-old with wins at 3* level with Laura Renwick.

The Oldenburg stallion (Argentinus x Beach Boy) was bred in Germany in 1994 by Peter Schutt and first jumped in Britain under Nick Skelton as a 6-year-old at Foxhunter level.  Fate played a hand in the purchase.

“Nick found him in Germany and initially contacted Sir Phil Harris (owner of Hello Sanctos) about buying him, but Phil didn’t want a 6-year-old at the time but a ready-made horse so Nick showed the video to me while we were sat in his lorry at the Spanish Sunshine Tour,” explained Lisa.  “He looked special and Nick wondered if my father [John] would be interested.  There was no Whatsapp in those days so we had to physically post the video [by snail mail] to my father in England.

“A few days later it all happened rather quickly.  Nick flew back to England and he and my father along with a vet notoriously known for being a hard taskmaster on vetting horses flew to Germany.  Dad thought it would probably be a nice day out and they actually trotted him up on the street outside the yard – and the vet came back and said ‘I can’t find anything wrong with him.  He passed with flying colours and the deal was done there and then,” added Lisa.  “I have to thank two people – Nick, of course, and Phil Harris for not wanting a 6-year-old!”

Arko was also ridden by Andrew Saywell and Robert Whitaker in his formative years, finishing fourth in the HOYS Foxhunter final with Andrew before Nick again took the reins to move into International competition.  The pair went on to represent Great Britain and post clear rounds in numerous Super League Nations Cup teams, contend the 2004 Athens Olympic Games, the 2005 European Championships along with victory at top level including 5* Grand Prix wins in Italy, Portugal and Switzerland.

Arko retired from competition in 2008 and concentrated on stud duties for 10 years before retiring completely after the stud season of 2019 to spend his days in comfort at Shaw Farm Stud.

RIP Arko – thank you for the memories.