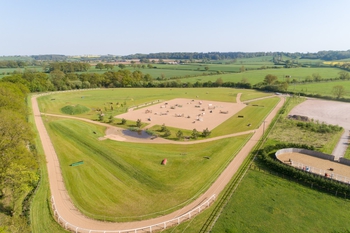 Within the past few days British Showjumping have completed on the purchase of Home Farm, Hothorpe in Leicestershire with the plans for it to become the National Training Centre for the sport.

Acquiring and developing a National Training Centre has been an ambition for the Sport over the past ten years and it is with great delight that British Showjumping are now able to announce that such a superb facility has been secured.

The National Training Centre will provide a modern facility for members in respect of training and educational facilities whilst also providing the sport with a solid commercial investment which will underwrite the sports financial standing further.

Home Farm offers 120 acres including residential and equestrian facilities. The intention is that the venue will encompass short break accommodation and conference facilities as well as providing top class training facilities for members, officials and volunteers alike.

Les Harris, Chairman for British Showjumping said “Purchasing a venue with a view for it being the official National Training Centre gives the sport a solid foundation to base itself from whilst also offering facilities that all members from grass roots through to top level riders can benefit from whether it be as a producer, competitor or owner. The Centre will also provide a superb environment for Coaches and Officials to undertake their official training as well as becoming a central point where all stakeholders can come together for the good of the sport.

“As a sport, British Showjumping are in an enviable position of being financially secure.  The offices at Meriden have given the organisation a modern environment to run from as well as a rental income since its purchase in 2012. By adding Home Farm to the portfolio, the Association will sit in the top tier of sports in respect of its financial security and the legacy that it will be able to build on as a result”.

Iain Graham, Chief Executive of British Showjumping furthered “It was always felt that the sport should have a National Training Centre.  Initially put forward as a vision by our at-the-time Chairman in 2008, it is a vision that has never altered as being the one we should be striving towards. This will allow us to have a modern training facility whilst reducing the current costs in terms of the hiring of venues, travel and administration that accompanies this.

“The site is not a permanent show centre and there is no intention for it to become one.  We depend on our show venues around the UK to deliver competitive sport week-in and week-out to our members; this is something I wanted to very much make clear.

“Many NGB’s and Federations have a National Training Centre and there are significant benefits to our sport having the same. This is a major step forward and will allow us to deliver quality training across all levels of capability within one central purpose built and appropriate environment.  We trust that the facility will be an inspiration for everyone who uses it and that it will serve to deliver both the ongoing development of the sport and the performance of those competing within it.”

Nick Skelton CBE, Individual Gold medallist at Rio 2016 and Team Gold medallist at London 2012 commented “Having a National Training Centre for showjumping can only be seen as an extremely positive step forward for the sport and one that is at least thirty years overdue.  I stand by the fact that strengthening the sports property portfolio is the best investment British Showjumping could have made and in their purchase of Home Farm they have acquired an outstanding training facility that the membership and sport as a whole will benefit from.

“Before any Championships we all come together for team training and if there had been a permanent site such as this that could have become our camp for a week or two before London or Rio it would have been superb.  Facilities such as these are rare and from a Member perspective I can’t think of anything more inspiring than for a Junior Academy member to be training at the same venue the Olympic Team were training at only weeks before.

“I am looking forward to seeing the plans for the National Training Centre come to fruition and I will definitely be spending some of my time there assisting our potential medal winners of the future alongside the rest of the performance team working with them.”

Further information regarding the National Training Centre will be released in the near future before it opens its doors for business later in the year.