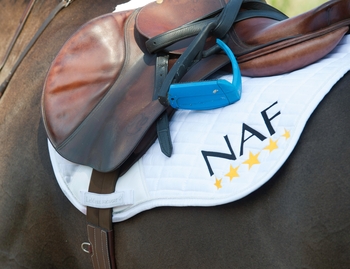 The following riders have been selected to represent Great Britain under the title sponsor of Team NAF in the FEI Jumping Nations Cup Children and Pony Finals in Kronenberg, Netherlands. The competition takes place between the 23rd and 26th September 2021 at Equestrian Centre de Peelbergen.

Ruby Ward, aged 14 years from Neston in Cheshire, with the 10 year-old chestnut mare Giddy Up Tango owned by Michael Whitaker.

For further information on the show and full results once the show is underway visit https://www.peelbergen.eu/?lang=en

The GBR showjumping teams are supported by the British Equestrian Federation’s World Class Programme, funded by UK Sport through the National Lottery. The Programme focuses on identifying talent, developing potential and maximising medal-winning performances on the world stage. The teams are further supported by LeMieux, who supply the teams with saddlepads.