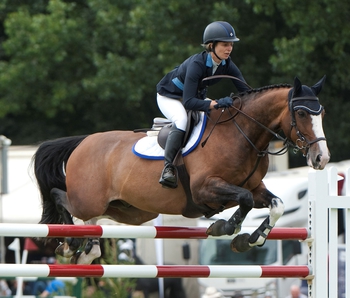 The sixth leg of the International Stairway Series 2019 took place at the Royal Norfolk Show on Friday afternoon and it was the ultra-consistent Finmere based Helen Tredwell who triumphed once again.

She also took fourth place on her own and her father Alan Tredwell’s homebred mare Larksong, a 14 year-old by Vangelis S. They posted a time of 51.31 seconds but lowered the penultimate fence leaving them the fastest of the four-faulters.

Second place went to Adrian Speight and Millfield Baloney, a 13 year-old British bred gelding owned by Judith Whitham. They posted a double clear in 52.39 seconds. The third of the double clears went to Paul Bevan with his own Deangelo II an 11 year-old Dutch bred gelding whom Paul has produced since 2013, they were clear in 54.21 seconds. Oliver Fletcher took fifth with Lady Pauline Kirkham and Lady Pauline Harris’ Hello Disckoboy D.N., a combination who have recently been selected to compete on the Team NAF Junior European Championship Squad next week; they crossed the line with four-faults in 53.36 seconds.

The International Stairway takes place across a number of county shows where winning combinations accrue League Points that count towards the Final which takes place at the British Showjumping National Championships in August at Stoneleigh Park. The series culminates with a high profile championships where three Horse of the Year Show International Wild Cards are allocated as well as it being where the sports National Champion is crowned.