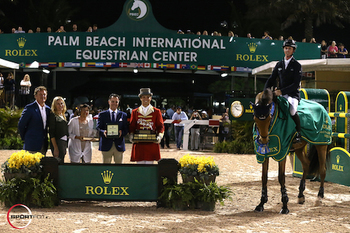 Forty of the circuit’s best horses and riders representing 13 different countries jumped for the winter’s top prize competing under the lights in front of a packed house at the Palm Beach International Equestrian Center (PBIEC) in Wellington, FL. The star-studded competition concluded a fantastic 12-week circuit for the international showjumpers. The circuit wraps up on Sunday, April 3, with the $50,000 USHJA International Hunter Derby on the grass derby field at The Stadium at PBIEC.

Anthony D’Ambrosio (USA) set the courses in the International Ring at PBIEC for the final week of WEF competition. With 40 starters in the grand prix, D’Ambrosio’s first round course yielded seven clear for the jump-off, and only one clear over the short course for the win.

Chloe Reid (USA) and Codarco were the first combination to clear the course in round one, but opted not to continue on to the jump-off to automatically finish seventh. Yann Candele (CAN) and the Watermark Group’s First Choice 15 were then the first pair to jump the short course, finishing with 12 faults in 52.31 seconds to place sixth. Jessica Springsteen (USA) and Stone Hill Farm’s Cynar Va jumped next, with eight faults in 48.69 seconds to finish fifth.

McLain Ward and HH Azur, owned by Double H Farm and Francois Mathy, jumped off next, finishing with a fast time in 46.10 seconds, but added an unfortunate four faults that left the pair in second place. Meredith Michaels-Beerbaum aimed for a safe clear round aboard Artemis Equestrian Farm’s Fibonacci 17, but also dropped a rail along the way, finishing third overall with her time of 51.41 seconds. Maher and Sarena followed, completing the only clear round over the second course for the win with a steady round in 53.72 seconds. Last to go, Todd Minikus (USA) and Two Swans Farm’s Babalou 41 had one rail down as well, finishing fourth with their time of 52.63.

Speaking of his winning mount, a ten-year-old Selle Francais mare (Calvaro Z x Damoiseau d’Or), Maher stated, “I have had Serena for just over a year now, and it has been a tough ride. She was a horse that was bought to jump these big classes, but she was young when we got her, and it really took a year to get to know her and for her to get to know me. It has been a lot of hard work and patience from Jane Clark, who supported me the whole way through last year, because I had a lot of disappointing rounds. I told her to stick with me, and we worked hard with the whole team at home. This is the first class she has won, but she picked the right time and I hope there will be many more.”

Maher spoke further about how he has gotten to know Sarena more over the last 12 weeks at WEF and really used the circuit to develop their partnership.

“We had a careful plan,” he explained. “She did not jump much since November and became pretty consistent over the last few grand prix. The worst she has had is one down since November. I found in the jump-offs, when I try to go quick, she starts to run backwards a little bit and it is not always a nice feeling. She has to get confident and get used to running and jumping.

“The course tonight, I thought she jumped the first round excellent,” Maher continued. “It was the first time under the lights for her, and she did not seem to be affected by that. It was a tough course, but the jump-off really played into my hands. Had McLain’s turn pulled off, and had Meredith left the jumps up, I do not know if I could have actually been quick enough to beat them, so I decided to play it a little safe and leave the jumps up. That is not my nature normally, but I think I played a smart game tonight and put the pressure on Todd. Fortunately for me, it worked out. It could have gone either way.”

The cards did not play in Ward’s favor this time around, but the rider was happy for Maher, and felt that HH Azur jumped two great rounds. The ten-year-old Belgian Sport Horse mare (Thunder van de Zuuthoeve x Sir Lui) took a big win in week seven’s $380,000 Suncast® Grand Prix CSI 5*. Ward gave it everything in this week’s jump-off hoping for another victory, but one unlucky rail came down.

“We have been building up towards this trying to get her fit,” Ward noted. “Our plan was to try to not totally peak her, but pretty much peak her at this point and then drop back a little, have a little rest, and then aim for Rio. She felt another gear tonight and to be honest, with these guys coming behind me, I was not trying to leave anything on the table. I was kind of trying to put the knife in them. I think her pole was a little bit unlucky to be honest. I do not think she hit it very hard. I maybe started to press to the last line a touch early. The horse performed great, I was happy with the riding, and you have a great winner. Ben is a super, top, world-class rider, one of the best in the world. It is always nice to win, but you can live with being beat by a guy like this.”

Michaels-Beerbaum also thought Fibonacci 17 jumped great and just had an unlucky rail in the jump-off. The 11-year-old Swedish Warmblood gelding (For Feeling x Corland) finished the night in third place, and his rider was happy to be in the top three alongside Maher and Ward.

“Fibonacci was in great form tonight; he felt amazing, and he jumped two beautiful rounds,” Michaels-Beerbaum stated. “I did not actually expect to knock one down in the jump-off because he was jumping so well, so maybe I took that jump a little casually or underestimated it perhaps. I was delighted with him. I am very pleased to be in the top three. That is always where a rider would like to end up, and with these two in front of me, my Chef d’Equipe Otto Becker will read their names in Germany and know the class was really hard and good, so it works for me.”

Maher spoke of the night’s first round track, stating, “I thought it was a great course. For my horse in particular, it started a little bit bold. I knew the water to the double verticals was going to be a difficult ride. It did not feel so comfortable how I got that done, but I got it done. The last line, the horses were tired and it was a big oxer coming out. The Rolex oxer was wide at the end, and for sure a lot of hopes were dashed there. I thought there would be more clears actually. They all jumped well, but it is hard to jump double-clear in these grand prix.”

Ward added his thoughts on the course, stating, “I thought Anthony did a great job. He had the right number of clear, faults all over the place, and it was a very smooth course to ride. The water line was a little tricky, but I thought it gave the riders a fair chance, and was an excellent course.”

Commenting on the end to a fantastic evening, Equestrian Sport Productions’ CEO Mark Bellissimo added his final thoughts, stating, “I want to commend this group. It is such an international crowd with USA, Great Britain, and Germany represented with all world-class riders. It is exciting to see such great sport here and to end on a very high note. I am pleased that everyone was so spectacular in their performances this evening. I would also like to thank Rolex. This festival took a big transition a number of years ago when Rolex came on board, and it was a transition to four five-star [shows]. It was nice to finish this year on a great five-star and a great class.”

Along with the winner’s share of $165,000, Maher was presented the Dennis D. Dammerman Perpetual Trophy. The trophy was created to honor the contributions to equestrian sport of Dennis D. Dammerman, a longtime owner of horses and founding member of the Wellington Equestrian Partners.