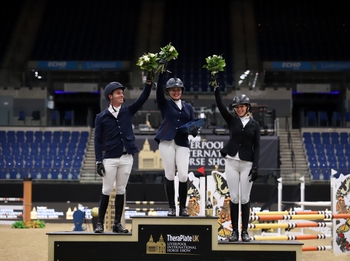 Polly Shaw had double cause for celebration as Sunday's action got underway at the TheraPlateUK Liverpool International Horse Show.

The Hertfordshire rider followed up her victory in Saturday's CSIAm-B two-phase competition, by taking the one-round speed class, sponsored by Gatehouse, with her 10-year-old grey mare Golden Grove Alt A.

And in doing so, Polly also successfully defended the Liverpool title she won 12 months ago on the same horse.

"That was the speed class we won last year, and they are her favourite type of classes," said Polly.

"I watched Tony Pearson go - he was two before me - so I checked the route he went. There were a couple more of turns I could have done, but I had a clear strategy.

"It was then quite a long nervous wait then before finding out if we had done enough.

"She is an all-rounder type of a horse, and the preparation for Monday's grand prix has gone really well."

There was success for Liverpool rider Joanne Mcglory in the day's opening class - the CSIAm-A one round, sponsored by Black Cat Building Consultancy.

"I am on a borrowed horse here, and it is the first time for me riding him this weekend. He is a mega-horse, so easy to ride and such a gentleman," Joanne said.

"I absolutely love the show. I only live 20 minutes away and was born and bred in Liverpool. I love to jump here, and I would love to compete in the four-star classes here in the future."